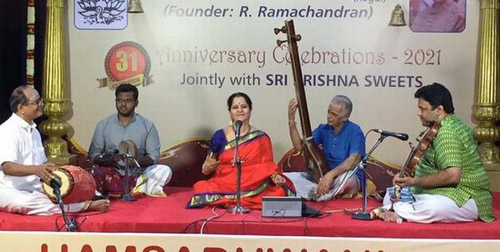 Patriotic songs are high on emotion and have beautiful lyrics. Add the colours of Carnatic music and present them in kutcheri format and one can feel the power of the combination. Gayathri Venkataraghavan proved it at her concert for Hamsadhwani to mark the 75th Independence Day. She ensured that the primacy of the song themes were preserved even while bringing manodharma into play. Music was thus an additional ornamentation to the lyrics.

The two substantive segments of the concert featured Subramania Bharati’s ‘Thondru nigazhntha’ in Bhairavi and tisra ekam and a ragam tanam pallavi in Hindolam. The elegance of the Bhairavi alapana was in tune with the spirit of Independence . Apart from a few novel phrases like ‘pa ri sa’, both Gayathri and violinist Ananthakrishnan offered measured embellishments to a conformist course.

A bright mood was set up with the song ‘Bharata sakthi’, in Hamsadwani, with crisp swarams. Gayathri then sang ‘Jayati jayati bharata mata’ (Mayuram Viswanatha Sastry) in Kamas, once popularised by many stalwarts, especially GNB, at hurricane speed, perhaps for the percussionists to warm up. Raga choices befitted the occasion, with a Kapi alapana sketch followed by ‘Swatantra bharatham’ and a short viruttam in Mohanam that led to the popular Bharati song, ‘Vetri ettu thikkum kottu murase’. Ananthakrishnan’s sensitive responses on the violin brought out the soul of the songs.

Hindolam was rendered in a Hindustani style with short phrases and sustains that boosted the opportunity to present more karvais. Gayathri’s treatment was gentle and soothing. An RTP with patriotism as the undertone could have sounded alien, but the lyrics and a lilting misra chapu structure ensured that the piece stayed within the overall mood. ‘Vande mataram sujalaam suphalaam’ was the pallavi. Following a brisk trikala singing, Gayathri appended soft swarams in Hindolam, Sama, Madhuvanti and Kamboji to give completeness to the pallavi.

Tukkadas on this occasion offered a wide choice but none portrays the celebratory bugle as well as ‘Aaduvome pallu paduvome’ in Maandu, and Gayathri lent her own verve to the song, which resonates with R. Sudarsanam’s immortal music and the legendary D. K. Pattammal’s voice. ‘Vande mataram’ in Hamsanadam, ending appropriately with Desh, brought the concert to an end.

Ananthakrishnan stuck to the essential tenor of the concert admirably while Ganapathi Raman on the mridangam and Sunil Kumar on kanjira were in their elements thanks to the brisk course of the concert and the well-known lyrical meter. Reining in the music from over-indulgence was a laudable effort by Gayathri.